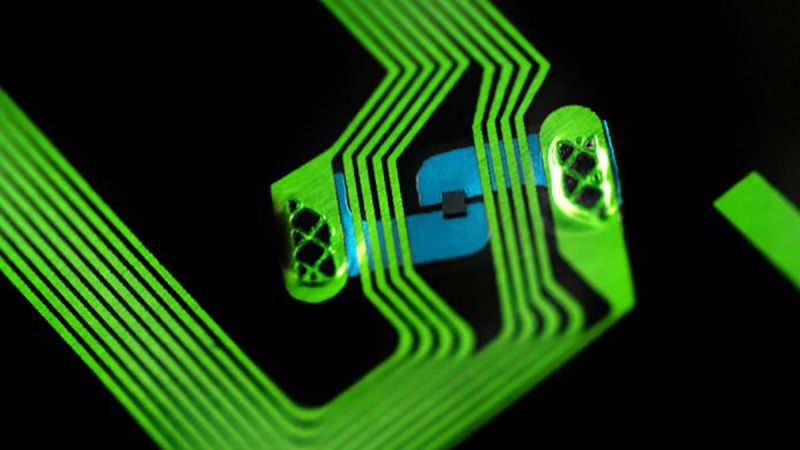 How do NFC tags work ?

The antenna on an NFC sticker or inlay is made of etched aluminium or occasionally copper. Copper is more expensive to use than aluminium but performs slightly better so is only used in the smallest of NFC tags where getting that extra bit of scan distance is important.

The NFC antenna is very carefully designed to resonate at the desired frequency (13.56Mhz) and ensure that this happens as efficiently and as effectively as possible.

Badly designed or made NFC tags can have very poor tuning which means that not all tags are produced to resonate at the correct frequency. It's not uncommon on cheap tags to find that scan distance performance can vary from tag to tag.

As an interesting note, NFC tag antennas are not technically antennas at all. They are actually inductors designed to convert nearby magnetic fields into energy.

This is the often the NFC tags' Achilles heel - the bit that gets broken when you bend them too much ! The bond is the connection between the tiny chip and the antenna. It's a small solder electrically connect the terminal on the microchip to the antenna.

On a normal NFC sticker or inlay, the bond will be protected by the substrate or plastic that the antenna and chip is attached to. On inlays, this might be a single sheet and on labels/stickers, this will likely to be two layers of plastic. These layers aim to stop movement on the bond which might cause a break.

If the bond breaks then you can get either no response from the tag (because the chip is no longer attached to the antenna) or worse, intermittent performance depending on factors as simple as temperature changes.

On some tags, such as our garment flex NFC tag, the bond is strengthened by the additional of an epoxy glue blob over the top. This increases the strength of the area around the chip and bond preventing possible failure. In addition, the plastic sheets holding the tag together can be made slightly thicker, helping protect against damage by flex.

While NFC stickers and inlays are made using etched antennas, high quality disc tags and some NFC products (wristbands, keyfobs, etc) use other types of antenna. These usually fall into two categories.

First, and more common, is a coil of copper wire which we is often called an 'e-unit'. The performance in terms of scan distance of these can often be very good due to the number of turns and therefore effective length of the antenna. On the downside, it's common to find serious frequency tuning problems on cheaper items which can create scan distance issues.

The second option is a PCB (printed circuit board) antenna. These are typically double sided PCB boards where the antenna is etched on the outside on both sides to increase effective antenna length. Made correctly, these can be very effective, high performance and reliable antennas. However, this kind of performance comes at a price and they are typically only used in the more expensive industrial tags.

From the outside, it's very difficult to tell the difference. However, disc tags and products made with coils and PCB's will almost always perform better and have better long term reliability.

One of the problems with NFC Tag design is that, relatively speaking, they are expensive to make. While NFC Tags will get cheaper, the antenna etching and bonding process means that the unit price of NFC tags is always going to reach a lower limit.

To be cheap enough for NFC tags to make it onto mass market product packaging such as a jar of peanut butter or included in the pages of a magazine, the price per tag has got to fall to a few pennies/cents.

Some industry commentators think that this is where printable NFC ink or possibly full circuits might come in. This allows the tag to be 'created' by printing possibly directly onto the surface of the card/plastic of the item.

At the moment, there are a couple of companies testing printed NFC antennas bonded to standard NFC chips. However, Seritag haven't seen anything so far that comes anywhere near the reliability or indeed price point that would be required for a large scale deployment.