What is an NFC Tag ? 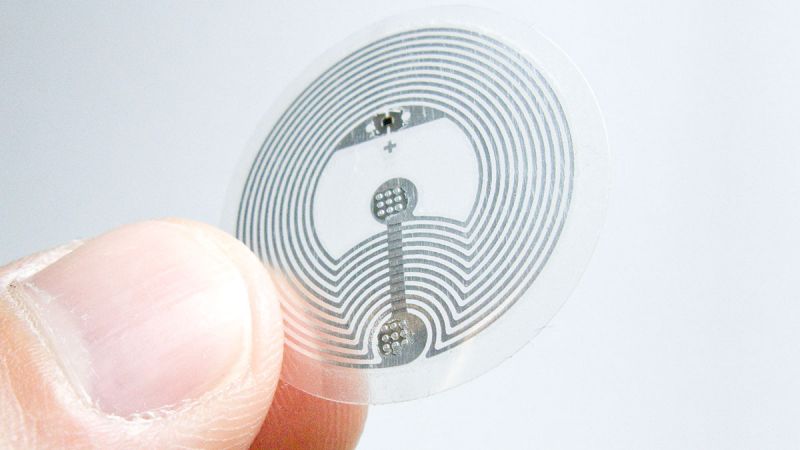 NFC (near field communication) is a wireless technology which allows for the transfer of data such as text or numbers between two NFC enabled devices. NFC tags, for example stickers, contain small microchips with little antennas which can store a small amount of information for transfer to another NFC device, such as a mobile phone.

An NFC Tag itself consists of three basic components: an NFC chip, an antenna and something to keep it together. The NFC chip is a tiny microchip which contains a small amount of memory and the technology to allow it to communicate. The antenna is a coil or loop of wire which, in the case of a sticker, will be an etching a fraction of a millimeter thick. The substrate holds it together and would typically be a thin sheet of plastic. If the tag is a sticker, it will have adhesive on one side to allow it to be attached.

Seritag refer to NFC Tags in terms of NFC stickers, labels, inlays or discs. Other NFC items such as wristbands, keyfobs or even drinks mats we refer to as NFC products. While the form of the product will vary, inside there will be the same basic NFC tag with a chip, antenna and something to keep it together.

What information can you store ?

Adding data to an NFC tag is called encoding. There's a wide variety of data types you can encode onto an NFC tag. For example, you may choose to encode a URL (web address), a telephone number or simply a small ID number. The data is usually stored in a particular way called NDEF (NFC data exchange format) encoding. This universal way of storing NFC information means that almost any NFC enabled device will be able to read and understand the data and what type of data it is.

How much information can be stored on an NFC Tag ?

The actual amount of data varies depending on the type of NFC chip used. Different tags have different chips and each chip has a specific memory capacity. It's worth mentioning that the memory capacity of an NFC tag is tiny compared to other memory devices you may be familiar with such as a USB stick or SD card. In fact, most NFC tags can store only about a sentence of text. A typical NTAG210 NFC chip can store only a URL up to 40 characters long. The popular NTAG213 chip NFC tag can store a URL up to around 130 characters.

However, this is all that you need. An NFC tag is generally regarded as being a reference to data rather than a data store itself. For example, you wouldn't store a website on an NFC tag. You would store a URL/web address that would link the tag to a full website on the internet. Similarly, you might store an ID on the tag so that you can tag an asset. That ID would enable you to identify the object and gain more information from the 'cloud' or other internet source. You wouldn't necessarily store any asset information directly on the tag.

We have put together some detailed information on how much memory you might need.

What are NFC tags used for ?

Generally, you can mark this into four areas - asset management, marketing, information access and personal use.

Marketing is just starting to gain traction, mainly because Apple has now enabled NFC on the iPhone. There's an increasing number of exciting projects being launched. NFC tags provide a way to connect a physical object to a virtual online world. For marketing, it enables brands to provide their users with a quick way to find out more about products and increase brand engagement.

Seritag used to consider Information Access as part of Marketing or Asset Management but the growth in the area means we now split it out. Essentially, it is the ability to use an NFC tag embedded within a product, item or packaging to allow a user to gain more information. For example, an NFC tag might be embedded into a product to allow the user to gain access (via the internet) to the latest user manual. Or, an NFC tag might be embedded into a restaurant table topper/sticker to allow access to the latest menu information or daily specials.

Asset management is a broad area and covers a number of use cases. This is probably the largest use area at the moment and with NFC tags being deployed everywhere from healthcare (where the person is the asset!) to counterfeit prevention systems.

Could someone change the data on my NFC tag ?

NFC tags can be locked so that once data has been written, it cannot be altered. For most tags this is a one way process so once the tag is locked it cannot be unlocked. Encoding and locking are two separate actions. NFC tags can be re-encoded numerous times until they are locked.

How can I encode NFC tags ?

The easiest way at the moment is to use an NFC enabled mobile phone. Almost any Android NFC enabled phone can encode NFC tags and iPhones from 7 onwards running the latest iOS13 operating system can now also encode. There are a number of Apps available to do this but we usually recommend NFC Tools or NXP's TagWriter. Encoding is as simple as opening the App, entering your web address and holding the phone over the tag. If you are buying a large quantity of tags and don't want to encode them yourself, then Seritag can encode the tags for you when you order. We have put together tutorials on how to encode NFC tags with an Android phone and how to encode NFC tags with an iPhone.

What else can I do with NFC tags ?

Like the number of NFC enabled phones, the number of NFC Apps is growing quickly. Contactless technology has become very important during 2020 and customer facing applications such as contactless menus have become increasingly normal. As people become more aware of NFC and scanning physical items for digital information becomes more normal, tags are starting to appear in packaging, clothing and products to provide authentication, information and identification.

How can I buy NFC tags ?

Is the NFC tag technology different than mobile payment tech ?

A lot of the press regarding NFC is about mobile payments. When you read an NFC tag, your phone is using the same basic technology. However, the communication process involved in making NFC payments is a lot more complicated. Most of the momentum with NFC is with mobile payment systems but this is gradually bringing other NFC use cases into the mainstream.

That's a very common question and the short answer is no. QR Codes are free to create and free to print and NFC tags will always cost something - even if that cost is gradually falling.

Seritag's opinion is that QR Codes and NFC tags sit alongside each other and both have their advantages and disadvantages. It's generally considered that the user experience with NFC tags is better. In the instances where the additional cost of using an NFC tag is less relevant to the overall cost (for example product integration or asset management), NFC can be powerful and very effective. NFC tags have a vastly more secure technology and the ability to clone or copy an NFC tag ranges from a little tricky to almost impossible. QR Codes can be copied instantly. NFC tags can be identified using varied artwork and the integration can be more sophisticated. For example, NFC tags can be hidden behind a brand logo or discreetly within the liner of a handbag.

Actually, NFC tags don't have batteries. They get their power from just being near a powered NFC device, for example a mobile phone. For those of you wanting to understand more, read about NFC Tag Antennas.

What is the scan distance of an NFC Tag ?

The answer depends on both your particular phone and the tag itself, but generally you need to be within two to five centimeters (two inches). The absolute maximum realistic scanning distance with an NFC phone and standard passive (non-powered) NFC tag is typically 8-10cm. For this reason, NFC works extremely well on a product level but isn't generally so great at a larger, perhaps poster, level. Once you consider a wider area such as a store, then other technologies such as QR Codes or Bluetooth start to make more sense.