NFC Tags, NFTs and the Metaverse 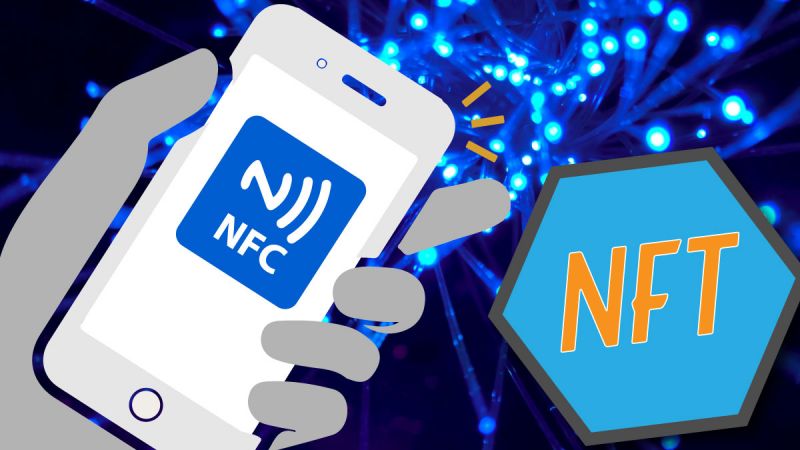 In this article, we are going to have a look at how NFC tags and NFTs can work together. Why using NFC to extend the use of NFTs both now and into our metaverse future could be the next big thing.

An NFT - Non-Fungible Token - is a digital blockchain-based certificate for a digital asset, such as an image or a video. It cannot be replicated. The 'non-fungible' part means that it's not interchangeable, it's unique and cannot be copied. For example, if you had a one pound coin and decided to trade it with another pound coin, you'd have the same thing - pound coins are 'fungible'. A non-fungible item has no direct replacement, it cannot be traded for something identical.

NFTs are built on blockchains, like cryptocurrency. The majority of NFTs are currently built on the Etherium blockchain using a standard defined as EIP-721. These digital certificates or signatures can be used to represent a wide variety of digital assets such as images, videos, music, tweets and more.

It's normal to describe NFTs as the digital asset such as an image, video or so on. However, it's important to understand at this point that the NFT doesn't actually contain the asset. The image JPEG, video, etc are stored elsewhere on another server - typically openly accessible - and the NFT simply provides the certificate of ownership. Sure, you are purchasing the image when you buy the NFT but in reality, you are only buying a certificate that proves ownership of that image. There's rarely anything stopping anyone downloading a copy of the asset. The NFT simply proves who owns it. Therefore, unlike a traditional artwork asset such as a Picasso painting, the value of the asset is not really the asset at all. It's simply the NFT itself that, in the majority of cases, will link to the asset.

Clearly that asset may move or be deleted. Which is why many NFT assets are now stored on a distributed network of servers such as IPFS.

While the first NFT was created back in 2014 and the EIP-721 framework was first proposed in 2017, it's only the last couple of years that the market for NFTs has really taken off. Exact figures vary significantly but on most estimates, the NFT market is 'worth' many billions of dollars.

Why are NFTs on blockchains ?

This requires a little rewind perhaps to what a blockchain actually is. A blockchain is a mechanism to store digital information in a way that makes it almost impossible (if used correctly) to alter the information. It works, in essence, because each change in information is linked to the previous state and all this information is stored on any number of computers. Anyone trying to 'hack' information on one server will be overruled by the rest of the network.

While blockchains are generally associated with cryptocurrency such as bitcoin, they are suitable for a wide range of different use cases. Using a blockchain to record the ownership and history as a digital certificate for an asset is therefore very useful. In essence, you have what the art market would call 'provenance'.

The key point here is that the concept of NFT works because the data is open and distributed. No single server controls or manages the data.

So, an NFT is a digital asset or perhaps better described as a digital certificate for a digital or 'virtual' asset. However, if you want to create a link to a physical object - a real life object - then you need to extend that security. Which is where NFC tags take over.

However, not all NFC tags are created equal.

There's two types of NFC tag - standard tags and authentication tags. Standard NFC tags, using chips like NXP's NTAG213, are designed to store static data. So you would store a web link and when you scan the tag with a phone, it will present that web link each and every time. This is in the same way that a printed QR code would. The data is stored and doesn't change.

Authentication NFC tags, like NXP's NTAG424, 426, 223 or 224, work differently. These are more advanced and also store a key which is used to generate a unique code on each scan. This unique code can be verified on the server to provide a very high level of confidence that the NFC tag is what it claims to be - and therefore the object that it is attached to is genuine.

In reality, only these advanced authentication tags complete and secure the link between the physical object and the digital certificate.

Connect an NFC tag to an NFT

It's probably easier to start by making it clear that the NFT itself is not stored on an NFC tag. In much the same way as the NFT doesn't actually store the asset and is just a link to the digital asset, the NFC tag provides a link between the physical object the tag is attached to and the NFT itself. What does that actually mean ? Well, it's likely that in most cases it won't mean just linking to a blockchain explorer or standard online NFT verification system. While this might show NFT data such as current ownership and so on, it's not a use case that we would expect.

We expect in most cases that it will link to a software service or application that will manage the connection between the physical asset and the NFT in a more user friendly or logical way.

Readers that are following closely may realise that this could present something of a security problem. While the NFC tag can be authenticated to ensure that it's genuine, the link that it will present could itself be duplicated. In short, the link presented by the tag could be copied onto a non-authentication tag and therefore bypass the NFC authentication process. The answer to this is down to the way that the combined system is setup. Again, we don't expect NFC tags to link directly to a third party blockchain explorer but rather an application that would sit between the two. This connection can then be secured by ensuring that the authentication NFC tag - and only that authentication NFC tag - created the link to the App or web page. For example, our Ixkio tag management platform can be used either as an API or with a redirect trackback function to ensure linking is secure and correct.

Why use NFC tags instead of QR codes ?

Because only NFC tags can provide genuine authentication of a physical object. There's been a number of very high profile projects which have used QR codes as if they are some kind of secure identifier. Bulgari even released a watch worth hundreds of thousands of dollars where they linked a QR code to a NFT artwork. However, QR codes provide no security against being copied.

Bearing in mind that the concept of NFT is for managing the ownership of digital assets, such as images and videos, where do NFC tags actually fit in ? Fundamentally, it's either about providing customers with some kind of special digital asset when they purchase physical goods, or vice versa.

For example, providing customers with limited edition digital items when they make a physical purchase, whether that be clothing, records or even stamps. It doesn't even need to be physical item - it could be a visit to a specific place. Perhaps a concert, nightclub or other event. The NFC can be located at the physical location and the user can access unique digital assets from the visit.

It can also be the other way round. Providing a physical certificate, gadget or other item as a gift, trophy or other physical item to represent a valuable or unique digital purchase.

Linking an NFC Tag direct to a digital asset

The answer is generally about provenance. The blockchain NFT doesn't just serve as the certificate for the current owner, it also serves as an immutable chain which contains the history of the digital asset. While the NFC tag can be used to confirm the authentication of the physical item it's attached to, the point of NFT is that it confirms the ownership/authentication of the digital item.

Authentication NFC tags are increasingly being used within the art world as a method of authenticating physical works of art. However (in the majority of cases), the tags don't store the data - they are a link to the data. In which case, while the physical asset is protected with the tag, the data associated with it can also be protected by using a blockchain.

NFC Tags and the Metaverse

This certainly isn't the article to go into the details of what the metaverse is and perhaps what the metaverse will be. But, in a nutshell, the metaverse is/will be a 3D virtual version of our real world. Probably. Facebook considered the potential of the metaverse great enough to change their name to Meta. To be clear, this whole concept isn't exactly new. It's now 18 years since Second Life got advertisers and brands all excited. It might also be a number of years before we can simply plug ourselves in (or live forever) in the metaverse. However, the concept now has some serious money, brands and enthusiasm behind it.

So how does using NFC, NFT and Metaverse all weave together. Essentially, because items you that you may purchase in the real world can then exist in the metaverse as well. For example, if you purchase the latest pair of sneakers/trainers in 'real life', by using NFC tags to verify your genuine purchase, you can also receive the same pair of sneakers/trainers within the metaverse for your 'virtual you'.

The link between the physical world and the metaverse is therefore connected, but in a secure and authenticated way.

If you have questions or want to discuss this topic, visit our NFC tags, NFTs and the Metaverse Q&A page.