Web NFC - interacting with NFC tags from a browser 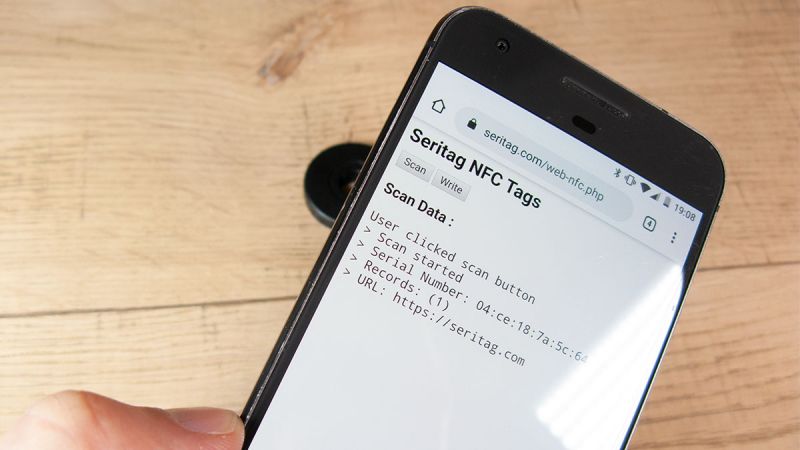 What is Web NFC ?

Web NFC provides the ability for users to interact with NFC tags via a browser. This is a significant development and has the potential to change both how and where NFC tags are used.

As most readers will know, reading an NFC tag from a mobile phone is typically done in two ways. With the latest iPhones (Xs, Xr, 11) or almost any Android phone, it's possible to simply wave the phone over an encoded tag to, for example, launch a website. The second method is to use an App. In which case, the App is opened first and then the tag can be scanned or encoded.

Web NFC changes this by allowing NFC tags to be scanned and written directly from a browser. This means that no additional Apps need to be downloaded to read an NFC tag, write to an NFC tag or access the UID.

Why this is useful

We can see a number of powerful use cases for this but two of the most important are user experience and ease of development. The ability to add NFC tag interaction to existing websites can be completed with a few lines of code. No requirement for complex App development, testing or messing about. The technology also allows access ot the tag UID, which can be used as an additional level of authentication and identification. In fact, in combination with the NTAG424 authentication chip, users can access a website, scan an NFC tag and get authentication of a product or item without any additional downloads.

What it can't do

At the moment, the scope for the WebNFC project is limited. While it's possible to write NFC tags, it's not possible to lock them - which might limit the benefits of being able to write to the tags. However, with access to the tag UID, in location tag deployment via the browser can still be undertaken as the UID cannot be overwritten.

>>Update : As of Chrome 100 on Android, it is now possible to lock NFC tags as well as encode.

Right now, it's not in full release. At the time of writing, the current version of Chrome for Android (81) has the technology built in but only under development registration. The current plan is to build the tech into release 84. However, clearly, this technology can only currently be used on Android phones and therefore widespread use of the tech is not likely to happen any time soon.

Without Apple iPhone support, it would be difficult to build a consumer based application around it. But, if Apple did adopt the tech, it might solve one of the signicant barriers on the older iPhone 7 and 8 which currently require an App download to read a tag. By allowing NFC tag scan from a browser, users can have an easier, more steamlined experience without the hassle of having to download an App to scan a tag.

Regardless, Seritag think that the tech has a substantial appeal to companies with internal intranets, websites, web applications and so on that can see use cases for NFC but don't want the effort of App development.

Seritag will be producing a video in the next few weeks for our NFC Pro Series video tutorials. More information can also be found at https://web.dev/nfc/. This will be an interested new technology. At the very least, developers can add NFC functionality to existing websites without having the cost and expense of developing an App. At best, the project will move forward to encompass more features and more widespread adoption.