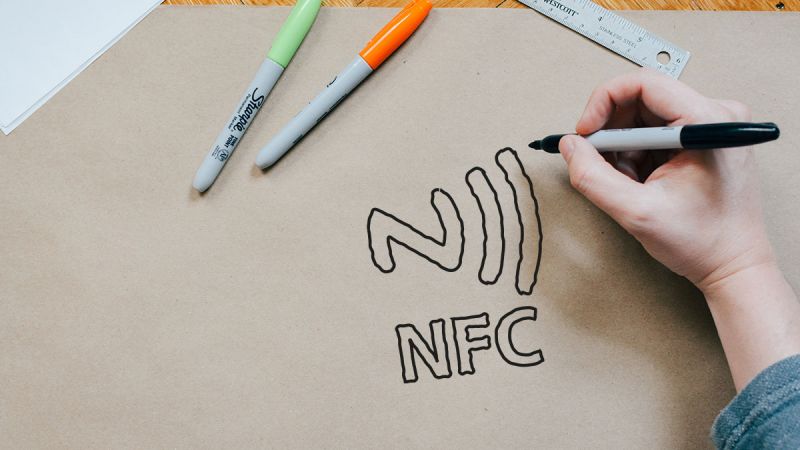 There's always been a bit of confusion about choosing which NFC logo or NFC icon. So let's help clear things up.

Well, technically, there isn't one. Unlike Bluetooth, which is a much more controlled environment, 'NFC enabled' products can be placed on the market without complying to any specific branding or marking format.

There is however an established and active governing body for NFC called the NFC Forum. The role of the NFC Forum is to help create the standards by which NFC devices can interact and promote the industry in general. The NFC Forum is funded by paying members which include many of the major players in the NFC industry such as NXP, Broadcom, Google, Sony, Visa, Samsung, etc.

The NFC Forum created their own logo for use with NFC enabled devices or products. These products need to meet the standards set out by the Forum but the use of the logo is reasonably unregulated.

This is the original NFC Forum logo, called the 'N-Mark' :

So that should make a simple decision then. You create your marketing item, product or whatever and apply the logo. However, it's not that simple and there's a few reasons why.

That's right. The NFC Forum don't just have one 'official' NFC logo. They have two.

The new NFC Forum 'Wayfinding Mark' was launched in 2021 to 'provide designers and product manufacturers flexibility'. There are two main variants of this for use with NFC tags - the 'directional' option and a 'simplified' version.

Both the simplified version (on the left) and the directional version (middle) have extra official 'instructional' variants with a hand/phone hovering over the icon.

In addition to the NFC Forum logo, there is also the Contactless Indicator logo from EMVCo. This is a very common mark that is typically used to indicate the ability to make contactless payments rather than perhaps interaction with an NFC tag.

EMVCo state that the mark can only be used in association with products and services conforming to standard NFC protocols such as ISO 14443 (most common NFC tags).

This is understandable as, like the NFC Forum, to keep and build user trust in the mark, it must represent a reliable service. However, it's important to note that this logo is a trademark of EMVCo and its use in non-payment based situations requires the prior review and approval of EMVCo.

In short, if you are planning a smaller NFC project and are not a large corporate, then this is almost certainly not the logo for you.

Let's be clear, very few people 'in the street' would recognise the original NFC Forum logo. In fact, in a survey carried out by the Seritag team back in 2015, 0 out of 50 people asked randomly in London correctly identified it as an 'NFC' logo. That's nobody.

Worryingly, 22 of these people thought it was the Nespresso coffee logo :

It's understandable why that might be the case. There's every possibility that this will change over time as the NFC Forum logo becomes more widespread and our London survey was carried out almost five years ago now. However, this will require the widespread use and adoption of the official NFC Forum logo rather than it's variants including the EMVCo mark. Since the launch of the new Wayfinding Mark from the NFC Forum in 2021, this is now even less likely to be the case because the logo options will be split even further.

Part of the reason many companies are not keen on using the NFC Forum logo is due to the requirement to use the N-Mark with either the TM or the ®. It's a requirement to include this when the logo is printed larger than 5mm, which, in product packaging it could well be. Packaging designers (or any designers) don't like these things.

However, there's also the requirement that the following statement be included on all product packaging, marketing literature, etc.. 'The N-Mark is a trademark or registered trademark of NFC Forum, Inc. in the United States and in other countries.'.

Watch the graphic designer's face when you tell them that. The statement is not always required. For example, when the N-Mark is used on a an electronic device it would be difficult to include the text.

Interestingly, even though Apple are part of the NFC Forum, they decided not to use the NFC Forum logo. When a tag is scanned on the latest phones, it presents a three bracket symbol.

The use of the this icon doesn't denote necessarily the presence of an NFC tag. It's also doesn't mean that Apple are suggesting that this is the logo that should be used with the iPhone. Apple could have used the NFC Forum icon in this position but they decided not to. Whether that was an accidental or conscious choice, we'll never know.

Essentially, anything you like. Most NFC tag vendors, Apps and so on have adopted their own logos. Many of the current designs are based around or are variants of the NFC logo designed by Phil Coote, Seritag's CEO, back in 2012 :

The designs typically have a wave effect with either just three curves or with a variant on the N.

Phil originally designed an alternative NFC logo for three reasons. Firstly because many customers were concerned about the restrictions on the use of the official NFC Forum logo.

Secondly, because of the confusion with the Nespresso logo and thirdly because the original NFC Forum logo didn't have the letters NFC combined with it. Much of the research undertaken at the time and indeed since indicates that the addition of the NFC letters along with a logo has a (fairly obviously) substantial effect on awareness of use.

Seritag own the trademark to this logo and it's use is free to our customers to indicate the presence of tags purchased from us.

There's also been another newcomer on the scene which is gaining a little bit of popularity. The material.io NFC icon is a square representation of a simple NFC antenna. Generally used within digital elements such as websites or Apps, the icon has also started to be used on products, printed material and other items. Material.io is described as a 'design system' and the NFC icon is a clear, obvious NFC based element.

There is, however, a little confusion on how the licence for using this icon might apply when used on physical items such as packaging or products. We'd be happy to hear from any trademark professionals so we can post some clearer advice here.

Recently, and partly because of the feedback raised from the original logo, regarding the lack of awareness, the NFC Forum modified the original N-Mark logo (keep up!) to include the letters 'NFC'. The latest N-Mark logo therefore can be used either with or with the NFC letters.

While the newer logo takes up more space, there's little question that it will increase awareness substantially. However, in perhaps a strange move, the NFC Forum didn't release an NFC letters version of their new Wayfinding Mark.

Which NFC logo should you use ?

Until the release of the new Wayfinding Mark from the NFC Forum, Seritag would have suggested that using a three bracket NFC icon was likely to be the best choice. It's simple, effective and, partly because of the four bracket variant used for contactless payments, is started to be widely recognised. However, we like the new Wayfinding Mark and while we don't think it's perfect, as a new NFC icon for everyone to try and get behind, it's a strong contender.

Seritag along with most seasoned industry commentators and indeed most branding experts will agree that the industry needs to use a single logo. It is important in the same way that the Bluetooth logo has widespread recognition. We think that the new Wayfinding Mark might just be that icon.

Seritag still don't believe (and haven't since Phil Coote designed the 'Seritag NFC Logo') that the original NFC Forum logo is going to be widely adopted. It is being widely used and plenty of companies - particularly electronics companies - have adopted it. However, it's not generally liked as a logo and the similarity, in our opinion, with the Nespresso logo is too strong. With the release of the new Wayfinding Mark, it's almost certain that the original NFC Forum N-Mark is now dead.

One thing is still very important. Include the letters NFC if you can and the more info you provide (scan here, place your NFC enabled phone here, image of a phone, etc) will substantially increase scan rates.